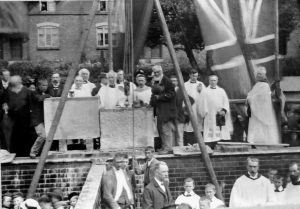 In 1897, the land where the Brownlow Centre now stands was donated by the fifth Earl Brownlow to be used as the site for a Church of England Boys and Girls School. 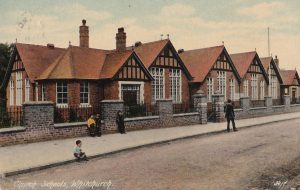 the ages of 5 to 12, and then later to 13, were entitled to free education. The younger children were placed in the Infants School at Bargates, and the older ones were educated at the new school in Claypit Street.

This situation continued until after World War II. During the war years, air raid shelters were built in the playground with massively reinforced concrete roofs. These remain today, forming useful storage units.
In 1947, the new secondary modern school was finally opened to children and with the introduction of the 11+, and with the siphoning off of the over 11 year-olds, the Claypit Street School became Whitchurch Junior School. Many of the older residents of Whitchurch have fond (or otherwise!) memories of the school in their younger days: some have mentioned the separated playgrounds, the toilets at the bottom of the playground and sliding down to them in icy weather, and the temperamental heating system.

In 1971, under the headship of Mr R.F.C. Hughes, the junior school started its move to the old Girls’ High School in Salisbury Road, and the move was finally completed in 1978 with Mr D Gillespie as the new head.
The Claypit Street building was then left empty for some years, and suffered from neglect and vandalism. Part of the problem was identifying who was the actual owner of the land. Eventually it became clear that the land still belonged to the Brownlow family, and it was gifted to the people of Whitchurch in 1982 by the present Lord Brownlow to be used as a community centre ‘..for uses that would enhance the quality of their lives.’ 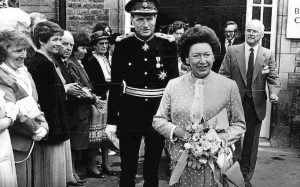 The centre was re-opened as a Community Centre in the 1980s by HRH  Princess Margaret.
Since then, the centre has been funded both by donations from supporters and charities, and from regular rental income from its many users.  It is run by the Trustees and representatives of local service Clubs. It has been a hard battle to repair  the building and upgrade it to modern standards of Safety, Health and accessibility.  The thermal efficiency has been improved by the introduction of modern boilers and efficient heating circuits, and by an ongoing programme of double glazing.  All of this has been done sensitively while retaining the essential character of  the cherished ” Old School”.

This is my footer